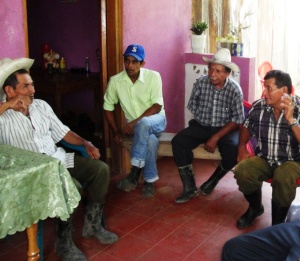 The idea that people need to be motivated to protect and invest in their forests raises many questions related to fair and appropriate benefit sharing. Benefit Sharing was the subject of a Knowledge Cafe Monday September 10, at the IUCN World Conservation Congress in Jeju. It will also be discussed during World Forest Week in Rome later in the month.

In the meantime, we reproduce here, in four installments, summaries of benefit sharing cases, excerpted from the overview of Making Benefit Sharing Work for Forest Dependent Communities, that shed some light on "what it takes."

Sharing revenues from timber: Lessons from the Tasibaiki Wood Bank in Nicaragua

Nicaragua has one of the largest tropical rainforests north of Amazonia. Hardwoods such as mahogany and royal cedar are found in these forests which also serve as habitat for tapir, jaguar and other cat species, monkeys, and varieties of birds. Logging operations in Nicaragua’s Atlantic coast, where much of Nicaragua’s remaining natural forests are found, has resulted in unsustainable use of the forest resources and limited benefits for the region’s indigenous communities. Responding to the developing crisis, in the late 1990s, the government imposed a ban on logging precious hardwoods, but weak enforcement had the unintended consequence of stimulating illegal logging activities. Also, indigenous communities that historically had managed the area were marginalized as the government treated the land as government property. Currently, the country loses between 70,000 and 100,000 hectares of forest each year.

Following the ban and rampant illegal logging, the German development agency (GTZ) in partnership with the Nicaraguan government launched a project to create certified wood banks. The aim was to promote sustainable forest management. Prior to this time, JAGWOOD+--a regional Forest Trade Network – became active in Nicaragua and worked to aggregate community-run forest enterprises, service providers, and small to medium wood product manufacturers. Both these initiatives aimed to reduce poverty and marginalization of indigenous rural communities by creating opportunities for them to benefit from a niche market for certified wood. They promoted small- and medium-sized forestry and wood processing enterprises by integrating them into a value chain for certified products, and ensuring concrete benefits and fair prices along the value chain.

The Tasbaiki Wood Bank scheme began in 2009 following negotiations between GTZ, members of JAGWOOD+ (specifically furniture makers), and community forestry cooperatives. The scheme involved local cooperatives supplying certifiable timber to the wood bank and furniture makers purchasing certified wood from the wood bank. Six partners—three local forestry cooperatives and three small furniture manufacturers—bought investment shares in the Tasbaiki Wood Bank, created as part of a GTZ project, to provide certified wood so that participating timber harvesters could sell to this niche market. JAGWOOD+ and Masangni (a local NGO) facilitated the project, provided technical support, and linked the timber producers to the furniture-makers. Approximately 700 people are associated with the three community forestry cooperatives and 150 furniture-makers have joined the partnership.

Three or four contractors from each community cooperative take turns harvesting the timber under one-year contracts. Timber harvesting lasts from 15 to 65 days each year; the rest of the time community members earn a living through subsistence farming, fishing, and mining. Each cooperative has a president who represents the cooperative on the Wood Bank Board. A few selected individuals from each cooperative also manage the resources and transfer proceeds from the sale of timber into local banks. The cooperatives receive a 30% prepayment for their timber, and the remainder when the timber is sold. Each shareholder receives a portion of the Wood Bank’s profits.

The benefits accrued to loggers and villages have not been easy to quantify because the scheme is only a year old and the community cooperatives were already investing in improving the quality of life of indigenous communities prior to implementation of the scheme. Participants reported that the partnership had not yet led to any obvious increase in community investments. One anticipated benefit was job creation, but many respondents reported that they had felt little economic impact from the arrangement. The respondents also indicated that the expected improvements in environmental conditions had not materialized.  Only 17% of participants in the scheme expressed high levels of satisfaction at the individual level, and 13% said they were satisfied at the aggregate level; only 9% were satisfied at both levels.

The Wood Bank faced challenges early on because of disagreements between the cooperatives and furniture manufacturers regarding pricing and product classification. Cooperative members felt they were selling at a low price and many said they were not paid equally in practice, even though each partner is supposed to receive the same payment for each share in the Wood Bank.  They took issue with how profits from the sale of timber are distributed and felt the scheme benefitted only a subset of each community by providing a small number of households with temporary work extracting timber. The distance between the local and external partners and distance to banks were major hindrances to quick transfer of financial resources from wood sales to local communities.

At the village level, the dissatisfaction with the partnership stemmed from a lack of tangible benefits. Villagers reported few new schools or roads attributed to the scheme. Prior to the scheme, village cooperatives were already providing benefits to the community, including solar panels for electricity, scholarship for students, and financial support to widows. At the donor level, the project was not viewed positively because the communities had not benefitted from expected investments in social infrastructure. Women were more dissatisfied than men because they had limited opportunities through the scheme and, unlike men, could not supplement their incomes with fishing, hunting, cattle ranching and subsistence farming.

Lack of clear channels of communications left communities with limited knowledge and suspicions that the cooperatives’ board members were using the partnership for their personal gain.  The scheme was criticized for giving a limited voice to the broader community. They cited poor communication among the six partners, a lack of clarity regarding the role of each, limited social ownership within the community, and a lack of interaction among community members and the Wood Bank Board. Community members were concerned about how the board works and some were unhappy about their representation on the board. The Wood Bank’s Board excluded traditional leaders, creating discontent among the local community. Local partners were concerned about mismanagement of their natural resources. Ecologically, the participants cited poor water quality, loss of biodiversity, and the removal of an important resource.

Participants cited key elements necessary to a successful partnership, including mutual respect, leadership, and trust, but said these elements were not always present. Details of the partnership were unclear and distance between the partners compounded the problem. The partnership didn’t result out of self-determination and there was a lack of trust and transparency in the process.

Future viability of the scheme depends on whether the communities benefit from the sale of their timber directly through job opportunities, and indirectly in the form of new roads and schools. Timber providers need to feel fairly compensated for the wood they sell. Communication between the village cooperatives and the timber providers needs to improve, and the leaders of the cooperatives should be selected in a way that respects the customs of the indigenous people. Furniture-makers suggested that representatives of the timber providers should have negotiating skills and a business perspective. The partnership also must take into consideration the prior illegal activities that occurred in the region and be able to outweigh those illegal interests.