What It Takes, Part IV: Sharing Benefits from Carbon 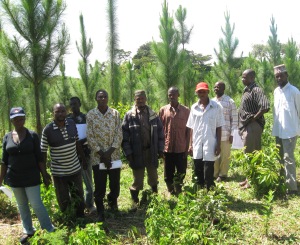 Villagers in parts of rural Uganda traditionally rely on forests for their livelihood and energy needs. Forests provide wood for poles, charcoal, and fuel, the main energy source for 90% of the population. To encourage forest conservation, the Environmental Conservation Trust (Ecotrust), a national NGO, initiated the Trees for Global Benefits Program, a cooperative carbon offset project that aims to reduce carbon emissions by paying villagers to plant trees in selected areas near national parks and forest reserves. The project began in 2003 with 30 villagers and has grown to include 400 villagers in four districts in southwestern and mid-western Uganda. Villagers volunteer to plant trees and in return receive payments for the amount of carbon they sequester. The goal is to reduce global carbon emissions by providing carbon offsets to overseas buyers, while enhancing the livelihoods of villagers and reducing their reliance on wood from the forest reserves.

The project was initiated by the Edinburgh Centre for Carbon Management, which assessed the potential for carbon schemes in Uganda. Social and environmental assessments were undertaken, as well as a biomass inventory. Ecotrust coordinated the project by finding buyers abroad who were looking to purchase carbon offsets and villagers who were willing to plant trees. The World Agroforestry Center (ICRAF) provided technical assistance, while Ecotrust offered training to tree growers and monitored the planting and growth of the trees to determine the payments due to the tree growers. CARE International provided advisory services, and DFID, USAID, and the Uganda Forestry Coordination Secretariat provided funding. The goals were to plant hardwood and fruit trees, establish forest reserve boundaries and buffers, and conserve and rehabilitate forests. Anyone in the four designated areas who owned land and was willing to plant trees qualified to participate in the scheme.

Agreements between the tree growers and Ecotrust are performance-based. Each grower is paid according to the number and the species of the trees planted, the agroforestry system adopted, and the tree growth rates over a 10-year period. The tree growers are paid 30% of the total amount due when 50% of the trees are planted (assuming there is a carbon buyer and an agreement signed). Another 20% is paid when the remaining 50% is planted. If 85% of the trees have survived by the third year, the farmer is paid another 20%, and if 85% continue to survive by the fifth year and are growing well , the planter is paid an additional 10%. If the trees continue to grow well after 10 years, the final 20% is paid. Carbon sales payments are channeled through village banks, which distribute the proceeds to tree growers. Tree growers receive 55% of the total carbon income, while a Carbon Community Fund managed by Ecotrust to benefit the larger community receives 6%, the Plan Vivo Foundation receives 6%, verification costs consume 5%, and Ecotrust keeps 28%. Ecotrust inspects ledgers at village banks and asks growers how much money they have received. Buyers also visit to ensure growers are being paid.

Tree growers benefit financially from the scheme, though later arrivals to the project have benefited more because the price of carbon offsets in the international market has gone up, while early tree growers were locked into their sales prices. The infusion of cash has helped the local economies as growers bought furniture, built homes, and opened savings accounts. Local business have thrived because the growers spent money and sold poles to local shops, which sold them for shade and fencing. Local banks were strengthened from increased customer savings, allowing them to extend more credit. There have also been non-monetary benefits to villagers who did not grow trees. For instance, trees planted in schoolyards are being used to teach science; some species provide medicinal herbs; and wood is now obtained from fallen branches and pruning, so women no longer have to go in search of firewood. There has been a marked rise in enrollment in secondary education because parents can afford to send their children to school. The trees are used for beekeeping and provide shade for animals, windbreaks, and help to decrease soil erosion, which has led to reduced silting of rivers. Property planted with trees has become more valuable.

The scheme benefited from trust established between the growers and Ecotrust, which allayed early fears among growers that the government would take their land once the trees were planted, and dispelled skepticism that foreign buyers would purchase carbon, a “commodity” that they couldn’t see or use.  This was important since many growers didn’t understand the carbon market. Continued engagement has also been ensured by having the agreements signed by village chairmen. This has helped override concerns among buyers and Ecotrust that growers, once paid, would migrate, sell their land, or cut the trees for timber.

Other factors leading to success included the legal validity of the agreements. Additionally, the agreements were voluntary, the market for carbon has remained strong, and the project was practical because growers were provided with the tools and the training to successfully grow trees. Compliance was verifiable and 85% of growers said they thought the scheme was fair. Growers showed the patience and perseverance needed to succeed because profits were not immediate but instead are being distributed over a 10 year period.

The future viability of the project depends heavily on Ecotrust’s ability to continue to find international buyers, which are scarce. While the number of growers has steadily increased, many of them complained that they were not able to fully bargain the terms of the contract, including the carbon price negotiated between Ecotrust and the buyer and that there was limited flexibility in the terms of the contract. Communication and access to information has become difficult as the number of participants increases and because participants have to walk to town to access the Internet and many are not familiar with computers. Growers also worried that the long-term nature of the scheme might mean that they would not reap the benefits of years of work should the agreement with Ecotrust end or the carbon market dry up. The growers also complained that payments were sometimes delayed because of the large number of participating growers and the fact that they were scattered, which made it difficult for Ecotrust to carry out the required monitoring and verification prior to payment.

Exchange rates fluctuate, resulting in varied pay for growers, who are compensated in U.S. dollars. Seedlings are considered to be expensive. Sometimes they were stolen and planted elsewhere, and some trees were destroyed by fire.  Initial payments did not cover the cost of planting the trees, requiring a high degree of initial labor without monetary reward. However, many growers say they are willing to take the risk because they hope eventually to sell the trees they have planted as timber.