Home » Knowledge & Tools » Impact Stories » Will Indonesia Get it Right?

Will Indonesia Get it Right? 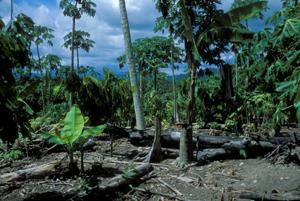 It’s been really hazy in Jakarta the last couple of days. This is the burning season here, as the clearing of forests and fields in advance of the rainy season is in full swing. Maybe people here have just gotten used to this, and I suppose it is old news, but I was amazed. Earlier in the month, motorists were being urged to turn on their headlights even during the day to accommodate the low visibility caused by the smoke. The obvious health impacts notwithstanding, the fires are incredibly tough to stop, largely because the incentives not to burn and clear forests and fields are pretty low. There is money to be made, and mouths to feed, pulp and paper to produce, timber to harvest, and palm oil plantations to grow.

In an effort to move the discussion forward, and to grapple with the many issues surrounding REDD, the Center for International Forestry Research (CIFOR), supported by a range of partners including PROFOR, convened a conference in Jakarta called Forests Indonesia to create a platform for a discussion about how best to manage forests without reducing the competitiveness of Indonesian business or sacrificing economic growth. The Conference was attended by around 1000 key stakeholders from government, business, civil society, and from the international community, and was addressed by Susilo Bambang Yudhoyono himself, as well as the Norwegian Environment Minister Erick Solheim, and the World Bank’s Special Envoy for Climate Change Andrew Steer.
President Yudhoyono reiterated Indonesia’s commitment to reducing its greenhouse gases to 26 percent of baseline levels by 2020, and gave a real boost to the Conference in his opening address, by again “daring the business world to think innovatively—to create a balance between gaining economic benefits and ensuring the preservation and sustainability of the global environment.” Minister Solheim was really upbeat, and gave Government a lot of praise for the progress which had been made so far. Andrew Steer focused on Indonesia’s low carbon growth path, and on how 7 percent growth and REDD were clearly compatible. Andrew noted the extraordinary progress which had been made in moving forward with REDD initiatives, and that the world was watching Indonesia with admiration and deep appreciation for the challenge it had taken on.
The Conference also gave a number of opportunities to listen to panels discussing critical and emerging themes: agricultural intensification, forest management, business incentives for REDD, and experience with REDD on the ground. I sat in on a discussion about agricultural intensification and palm oil production. In 2010, if there had been no growth in the palm oil or timber sectors, GDP growth would have dropped by only a twentieth of one percent – pretty negligible – and a reflection of Indonesia’s great diversification in its economy. Palm oil though remains an enormously damaging sector to forests, and moving production from high quality forested areas to degraded lands will be neither easy nor cheap. Global markets can encourage the shift though, and Indonesia is increasingly looking to global certification standards such as those of the Roundtable on Sustainable Palm Oil, to tap into the demand for ‘green’ products.
After the Conference closed late in the afternoon, I went out for a walk in the conference center gardens, nicely tended indeed, but no match for Indonesia’s tropical forests. No orangutans or tigers there. And the haze hung over the place like a wet rag. I hope Indonesia gets it right.
Related Links:
Forests Indonesia Conference
CIFOR Blog: President calls on businesses to unite to protect Indonesia’s forests
Jakarta Post: President vows to balance economic, conservation plans
Analysis of Alternative REDD+ Financing Mechanisms in Indonesia
The Role of Forestry in Low-Carbon Growth Strategies