Home » Knowledge & Tools » Impact Stories » Trouble in the forest, seen through the eyes of orphan bonobos

Trouble in the forest, seen through the eyes of orphan bonobos 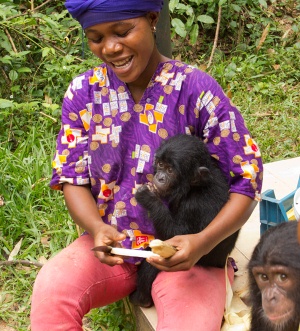 What if we heeded the warning calls of our closest relatives, the apes?

To the bonobos, also known as pygmy chimpanzees (with whom, by the way, we share 98% of our DNA), the signals are clear: pressure on their rainforest habitat is on the rise. And if nothing is done to put an end to rampant illegality and destructive activities, years of conservation gains could be dismantled in the name of greed and need.

The pressure is visible in the data below which charts the arrivals of orphan bonobos brought to the Lola-ya-Bonobo (“bonobo paradise”) sanctuary near Kinshasa, in the Democratic Republic of Congo. Baby bonobos are too scrawny to smoke and sell as food, so they are often kept alive by their captors who hope to sell them on as pets. But the sale and possession of bonobos is illegal, and rescued bonobos are placed, by law, in the care of the sanctuary’s staff.

Because bonobos require tremendous tender love and care to stay alive, especially after experiencing trauma, baby bonobos are slowly nursed back to health by substitute human “mamas” who look after them very closely till they are 5 or 6 years old. In March, the arrival of a baby bonobo named “Ndjili” (after the Kinshasa airport) caused an HR crisis: because of the surge in orphan arrivals in the last few years, there were no more available nursery aides, according to the account in the sanctuary’s blog, so the laundress was asked to pitch in.

Ndjili (far left) in the arms of her “substitute mother” Saharive. Ndjili was rescued from a bar near Kinshasa’s international airport after an anonymous phone call. She is about 2 years old. Bonobo specialists estimate that baby bonobos are likely to have witnessed the killing of as many as 10 family members before being captured, because babies stay close to their mothers and bonobo groups are dominated by females.

To Claudine André, the founder of the sanctuary and arguably the species’ most charismatic advocate, the uptick in bonobo arrivals, after several years of decline, is “a sign that something is seriously wrong upstream” in the forests of the Democratic Republic of Congo. Previous surges coincided with military campaigns and the re-opening of navigation on the Congo River. Awareness raising and conservation efforts in the four habitat blocks that are home to the bonobo had a positive effect that may now be eroding.

Bushmeat hunting tends to get out of control when large groups of people move into an area --to dig for minerals such as gold and coltan, for example, or as a result of conflict. “Poaching for ivory, illegal logging and other forms of trafficking all converge on areas newly accessed by miners,” says Kirsten Hund, a senior mining specialist at the World Bank who has studied artisanal and small scale mining in the DRC, Gabon, Liberia and Madagascar. New roads also encourage large and impoverished families to settle deeper into the forest in search of basic livelihoods, and give people easier access to growing urban markets for bushmeat and construction wood.

Claudine André sees awareness-raising as her number one mission: “When I’m asked what I have given the bonobos, I answer: At least 200 liters of saliva!” Her sanctuary educated 59,000 visitors last year, including 30,000 children from local schools.

Claudine, a fiery red head who came to the Congo as a child, has seen it with her own eyes: forest villages that housed 200 people just five years ago near Ekolo-ya-Bonobo, the remote bonobo reserve she set up in the Equateur province, now count thousands of people, she says. Although she has actively enlisted surrounding communities to help protect the bonobos, her investments in schools, health care and alternative livelihood schemes have not worked as well as planned. “People try to have it both ways,” she says: they welcome the benefits of conservation projects but also make deals with hunters and miners to get more income. Many conservationists, once in favor of strict exclusion of people from protected areas, have grown somewhat disillusioned with the alternative livelihoods approach and now call for stricter law enforcement along with community development, she says.

But Claudine fears it is a battle in which park rangers will be easily outnumbered and outgunned. Last June, seven people including two park rangers, and 13 okapis were shot dead in a massacre at the DRC’s Okapi Wildlife Preserve “in retaliation for recent engagements by ICCN rangers that disrupted poaching and mining activities in the Southern part of the Reserve,” according to a statement by the head of the Reserve quoted by Mongabay. (The ICCN, or Institut Congolais pour la Conservation de la Nature, is the country’s parks and wildlife authority.)

Claudine has lost two of the 15 bonobos that were released into the wildlife reserve Ekolo-ya-Bonobo since 2009 – presumably to hunting. She says she is rethinking the logic of exposing bonobos to poachers and other destructive forces that will close in on their habitat before long. “Perhaps I should create a second sanctuary instead,” she says, “to further raise awareness among young people and preserve bonobo genes for the future.” Bonobos only live in the DRC, between the Congo and the Kasai rivers. Because bonobos tend to reproduce less than humans, their population has declined steeply in the last 30 years. There are thought to be only 10,000 to 20,000 bonobos left in the wild (compared to about 150,000 common chimpanzees and 50,000 orangutans).

A study on Deforestation Trends in the Congo Basin, presented on May 15, 16, 2013 in Kinshasa, made the point that, paradoxically, the Congo Basin’s emerging political stability and economic growth could be just as threatening as conflict and poverty to the forests’ integrity, if law enforcement and land use planning are too weak. The authors based their analysis on in-depth studies of regional trends in agriculture, energy, transportation, mining and logging and trend simulations to 2030. They found that welcome developments, such as improvements in agricultural productivity and transport infrastructure, carried the risk of accelerating deforestation in the Basin – unless actions are taken to steer activities away from the most precious natural forests.

Although starting from a very low base, forest degradation and deforestation in the six countries of the Congo Basin (Cameroon, Central African Republic, Democratic Republic of Congo, Equatorial Guinea, Gabon, Republic of Congo) have almost doubled between 1990-2000 and 2000-2005. In response to global commodity demand, mining and agro-industrial activities could become significant drivers of deforestation along with more typical causes such as slash-and-burn agriculture and woodfuel extraction, which are closely linked to population growth. The study estimated that the area could lose 1.3 million hectares of rainforest each year, releasing the equivalent of 1 billion tons of carbon in the atmosphere, by 2030. The Basin’s population is expected to double from its 2000 baseline and reach 170 million people the same year.