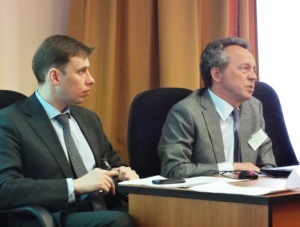 The quality of governance often determines whether forest resources are used efficiently, sustainably and equitably and whether countries achieve forest-related development goals. In that respect, a systematic approach to identifying areas of forest governance weakness, devising and implementing responses, and monitoring results is key to successful forest outcomes.

Over the last two years, PROFOR, the FAO and other partners interested in forest governance issues have worked to build a common framework for diagnosis, monitoring and assessment of the state of forest governance in various countries. Stake-holders in Uganda, Burkina Faso and Kenya have used this broad approach to identify priority reform areas. Now the Russian Federation is working on a similar initiative funded by DFID and implemented by the World Bank in four regions.

The first three workshops on assessing Russian forest governance gathered a broad range of stakeholders including regional forest authorities, forest research institutes, conservation NGOs, Indigenous Peoples, forest industry unions and associations and top companies. The workshops took place on February 28-29, 2012, in Khabarovsk, on March 15-16 in Krasnoyarsk, and March 20-21 in Arkhangelsk. The fourth one, in Voronezh, is due on March 27-28. The PROFOR tool was tested in these different regional settings by way of a discussion and a consensus-based assessment derived from responses to a forest governance questionnaire. Valuable feedback on the merits and shortcomings of the questionnaire applied to the Russian context was drawn from those discussions (see attachments below).

The Federal Forest Agency (FFA) sees this initiative as an important continuation of work done under Phase I of the ENPI-FLEG program (2008-2012), and a bridge to a proposed Phase II. In addition to identifying policy reform issues and providing a better understanding of federal-regional relationships in the context of forest governance, this initiative is anticipated to provide stakeholder-based information for discussion of cross-border timber trade issues between Russia and China.

A synthesis/wrap-up seminar will be held in Moscow in late April, with a session slotted for the next meeting of APEC scheduled for May.

Update 10/16/2012: Recommendations from the Arkhangelsk and Voronezh workshops were added to this page. In addition, a working paper summarizing the findings from this exercise was published in English and in Russian. It is available for download on this page.