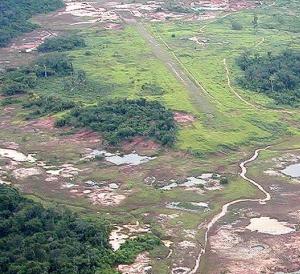 A new study published in the online journal PLoS ONE establishes a strong correlation between rising gold prices, mercury imports and deforestation in the Peruvian Amazon. In parts of the forest, deforestation has increased six-fold in recent years.

"At the two sites we studied, Guacamayo and Colorado-Puquiri, nearly 5,000 acres were cleared in just three years, between 2006 and 2009, largely outpacing nearby deforestation caused by human settlement."

With gold selling for over $1,500 per ounce on April 19, Erick Fernandes, Adviser on Agriculture and Rural Development for the Latin America and Caribbean region at the World Bank, shared with us a photograph he took near a research site in the Amazon. It illustrates the forest degradation associated with mining.

"Note the makeshit airstrip (uper left quadrat) to ship the gold out!" he wrote.