Notes from a muthi market 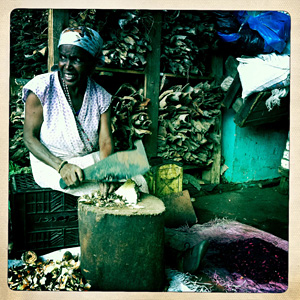 A few minutes’ drive from the COP 17 convention center, traders and healers are hard at work processing and selling bark, roots, tubers and animal parts endowed with medicinal and magic powers. The fifty or so stalls at the thriving outdoor market in Durban’s Victoria Street Market area, are a graphic reminder of the millions of people who depend on informal activities and “free” resources from dry forests and woodlands not captured in national statistics.

Dry forests, where many of these Non-Timber Forest Products are gathered, hardly register in the global forest consciousness either.But meetings in Durban this week may possibly fix that lapse.

Dry forests suffer from an image problem: scraggly trees, mixed with grasses and shrubs, are simply less charismatic than their dense, broad, closed-canopy cousins from the Congo or the Amazon. To paraphrase PROFOR’s recently released report on Managing the Miombo Woodlands of Southern Africa, they are “fundamentally uninteresting” in the eyes of conventional foresters, conservationists and carbon traders because they are relatively low value in terms of timber production and biomass.  These forests also fly under the radar, so to speak, because they tend to have lower tree densities than moist forests. According to an article on Mongabay.com for example, FAO’s new satellite-based global forest assessment  does not adequately reflect changes in areas of low forest cover which are typically found in degraded and dry areas.

But dry forests certainly matter to the 64% of Sub-Saharan Africans, who rely on them for a wide variety of goods and services (cooking fuel, fruits, medicine, honey, livestock grazing, etc), and for the millions of rural poor who would not survive without access to wild resources in time of economic and agricultural stress.

Research has shown that these forests function as a larder and “safety net” for the poorest of the poor, taking the edge off food insecurity and income disparities. For better or worse, these forest resources also represent the primary source of energy for a majority of people in Sub-Saharan Africa. They are also a huge source of employment - around 7 million people in Africa work in a charcoal sector whose market value is somewhere around USD 8 to 10 billion per year (and growing).

In recognition of these important multiple roles, CIFOR convened a one-day Dry Forests Symposium on December 1, 2011 in Durban (with co-sponsorship from PROFOR). The event gathered over 100 scientists and development experts who are interested in addressing research gaps to improve the sustainable management of dry forests in Africa. (See related CIFOR blog.)

Tony Cunnigham, a South African ethno-botanist, put this renewed effort to understand the challenges and opportunities presented by dry forests in the context of adaptation to climate change: “Dry forests are a ‘dry run’ for climate change,” he said during one of several parallel learning sessions: People who live and farm in these semi-arid forested zones have already developed strategies to survive annual dry seasons and occasional droughts (although they are likely to face increasing hardship and risks in the future). The plants and animals around them have also evolved in ways that could be relevant to societies struggling with increasingly hot and dry weather patterns in certain parts of the world.

On a short tour of Durban’s “muthi” market (“muthi” means both tree and medicine in Zulu) , Cunnigham pointed out the properties of a “resurrection plant” (Myrothamus flabellifolius) that grows on dry outcrops.

Healers believe the plant can revive the potency of other magical ingredients (say, for example, vulture brains, passed their prime).

Americans may remember the amazing plant ("Up to 50 years without water!")  from the mail order catalogues of their youth.

Scientists, too, find the plant intriguing, because its cell structure can survive long droughts: although desiccated and dead-looking in the dry season, the shrub bounces back to green life when moisture returns (see before/after picture on the right).

It's not hard to imagine the food security and adaptation applications of this convenient trait. University of Cape Town Professor Jill Farrant is one of several researchers who are already wondering how to use the plant’s resilient genes to create drought-tolerance in staple crops like maize.