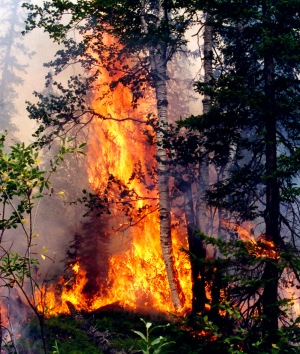 When wildfires swept across Russia this summer amid exceptionally hot and dry weather, they left behind more than 50 dead, thousands of destroyed homes and the stark realization of just how much good forest governance matters. After 1.8 million hectares of land went up in flames, the Russian government vowed to amend forestry policies that had decimated the corps of guards responsible for supervising Russia's vast state-owned forests and turned over forest management to regions and private concessionaires sometimes poorly equipped to protect forests.

The tragic fires have already served “to catalyze changes to the forest code of 2007,” said Ivan Vladimirovich Valentik of the Russian Federation -- a decree passed in late August created a federal forestry agency at the presidential level and more amendments to the code are under way.

Valentik, head of the state forest policy unit of the Department of Forestry of the Ministry of Agriculture of Russia, was one of a dozen country representatives invited to brainstorm informally with colleagues from aid agencies, NGOs and the private sector on how to improve baseline surveys and indicators to identify forest governance constraints and priorities for reform.
The Symposium on Forest Governance Indicators organized by the World Bank, FAO and the Program on Forests (PROFOR) was hosted by the Swedish development agency Sida in Stockholm on 13-14 September.
The event was part of a decade-long effort to improve forest law enforcement and governance (known as “FLEG”), starting with high-level ministerial commitments in Bali (2001), Yaounde (2003) and St Petersburg (2005).  A recent study by Chatham House suggests that this work has started to bear fruit: although illegal logging is still a major issue, it appears to have declined by 50 to 75% in 2000-2008 in Brazil, Cameroon and Indonesia.
In the last two years “poor forest governance” has attracted increasing attention from donor agencies and the media as a potential roadblock in the path toward the sustainable management of forests, whether as an engine of poverty reduction and economic development, or as an effective store of biodiversity and carbon to mitigate climate change. The phrase encompasses anything from bribing a truck driver to cart off illegal timber, lack of transparency in the way forest concessions are allotted, incoherent forest policies and weak managerial capacity, to the systematic failure to sanction forest crimes.
“Poor forest governance comes with enormous costs,” said Frances Seymour, Director General of CIFOR in her keynote address at the symposium. She emphasized four sets of costs -- ecological, economic, social and political -- which squander the huge potential of forests.

The costs of poor forest governance.

Developing countries are facing a host of demands for information that focus on different aspects of forest governance – from timber legality requirements increasingly imposed by the US and European markets, domestic demands for increased responsiveness and transparency in land tenure issues, to assurances that aid for reducing carbon emissions from deforestation and forest degradation (REDD) will not be squandered through ineffective or corrupt practices. “We need simplicity to communicate. But reforms require details,” said Ken Rosenbaum, a consultant facilitating the symposium. Seymour expanded on this dilemma in the following video:

The symposium took stock of ongoing initiatives led by PROFOR/World Bank, World Resources Institute, Global Witness, Transparency International and Chatham House – many of them painstakingly detailed, comprehensive, and admittedly overly complex for easy implementation. While a consensus has emerged on the gravity and scale of the problem, different agencies have come at it from different angles.
Participants agreed to work on finding commonalities between these approaches and start defining a joint framework of principles and criteria for assessing and monitoring forest governance.
Eva Muller, chief of the Forest Policy Service at FAO, noted: “This common framework will promote synergies and make it more practical and cost-effective to diagnose governance issues for a variety of purposes,” she said.
For Manoj Nadkarni, of Transparency International, simple indicators and data could have a direct impact on the quality of advocacy work in countries like Indonesia and Malaysia where Transparency International has started a Forest Governance Integrity Program. “You can show for example that deforestation results in too few prosecutions. Indicators are a good place to start for raising citizen awareness of corruption and encouraging people to take action.”
Steve Nsita, a forestry consultant who worked with PROFOR on its draft governance questionnaire in Uganda, suggested that part of good governance is imponderable – the part that relies on personal integrity and leadership. He described the collapse of forest institutions in Uganda which had worked well in the past and were still good on paper but had failed to deliver expected outcomes in the wrong hands.

A question of leadership