How would you tackle Madre de Dios? 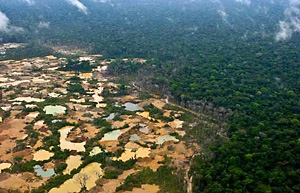 As the UN celebrated today the launch of the International Year of Forests, a story in The Telegraph popped on our screens with stark images of deforestation and pollution.

"We sped across the jungle along a narrow manmade path. (...) A sharp turn of the wheel later and the trees vanished, replaced by a vast desert dotted with shacks covered in blue plastic sheets where thousands of miners live. We were at the heart of a 21st-century gold rush that, environmentalists warn, is rapidly destroying the Amazon’s Madre de Dios (Mother of God) region in south-east Peru, 33,000 square miles of low-lying, dense rainforest containing the richest biodiversity on earth."

The article states further down:

"Illegal goldmining in Peru has grown into a £390-million-a-year industry, employing 100,000 people nationally (it was only a few thousand some years ago), mostly in Madre de Dios where, according to the government, more than 2,000 square miles of forest have already been destroyed (environment groups say this figure is three times higher). 'Madre de Dios is the most biodiverse region in the world because it was so remote and inaccessible,’ the botanist Oliver Whaley told me from his office at Kew Gardens in London. 'The Trans-Oceanic Highway is like putting a knife into the last large area of rainforest left on earth.’"

Some of the thorniest forest issues of the day seem concentrated in that section of the Amazon: issues of lawlessness and landless-ness, indigenous peoples who are both threatened and involved in the gold rush, the poorest of the poor working in the mines with few alternative sources of income, and large corporate interests at the end of a convoluted value chain...

Look at the pictures at the top of the Telegraph story (you can click several). And put the region's fate on our collective To-do-list: There's an urgent need to come up with social and sustainable solutions to this unfolding drama.