In Honduras, managing landscapes to protect water resources in a changing climate 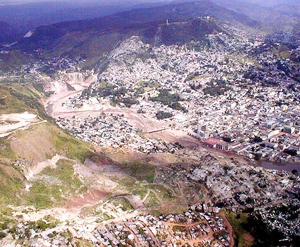 As leaders in agriculture, forest, and climate change research converge in Warsaw for the Global Landscapes Forum this week, a study focused on a watershed in Tegucigalpa, Honduras, provides a potent example of the extent to which land use management matters to preserving drinking water sources in a changing climate.

According to one climate change scenario predicted by the study, poor land management could cause soil erosion to increase by 155 percent, damaging reservoirs that are ths source of water for people and crops, and effectively erasing the potential positive effects on soil of the reduced rainfall that the scenario also forecast. In a city of one million people, where water shortages are so severe that some residents receive water only once a week, the study’s findings cannot be ignored.

Natural disasters, agricultural expansion, and urban sprawl have depleted forests in Honduras and left watersheds vulnerable to soil erosion. But land use management—good and bad—can have an outsized impact on what happens to forest and water resources in the future.

The case study, conducted by PROFOR, the Center for International Forestry Research (CIFOR), and the Tropical Agricultural Research and Higher Education Center (CATIE), underscores the importance of using forests and trees to enhance the resilience of different landscapes to climate change. (See 4-page brief here.)

Using Ecosystems Based Adaptation to lessen the effects of climate change

Climate change scientists predict different scenarios for different areas of the globe. For instance, average annual river runoff is likely to increase by 10 to 40 percent at high latitudes and tropical areas, and to decrease by 10 to 30 percent at mid latitudes and dry tropical areas by the mid-21st Century. As a result, 20 to 30 percent of the world’s plant and animal species may be under risk of extinction, and between 75 million and 250 million people in Africa may experience increased water shortages. In Central and South America, savannahs may gradually replace tropical forests. Under such scenarios, agricultural production would suffer from droughts, floods, and crop failure, leading to increased malnutrition and greater pressure to use forestland for logging and food production.

To mitigate these effects, climate experts have been researching the efficacy of a landscapes strategy called ‘ecosystem-based adaptations’ to climate change, or EBA, to reduce the vulnerability of watersheds, reservoirs, and soil to climate change. EBA can be cost-effective and sustainable. And these strategies can generate environmental, social, and economic benefits.

For instance, the Honduras study predicted a net economic benefit of between 28 million and 76 million, assuming a .5 degree Celsius rise in temperature, depending on whether the analysis used a high or a low climate change scenario. The study also considers the benefits that forests provide to ecosystems, including fiber, soil formation, pollination, and nutrient cycling.

Forests not only help mitigate the effects of climate change by storing carbon and slowing the rate of temperature increases. When sustainably managed, forests can also help soften the blow of climate-induced changes by reducing soil erosion and regulating water flows at the scale of entire landscapes.

Mindful of the role forests can play, Honduran water authorities drew up a plan to increase the amount of drinking water coming from vulnerable watersheds that included reforesting more than 1,200 hectares of land around springs and creeks and creating 100 hectares of fuel wood plantations. Funding for the plan remains a problem, but if put into action, the plan should help people and ecosystems adapt to the impact of climate change, a key feature of the United Nations Framework Convention for Climate Change.