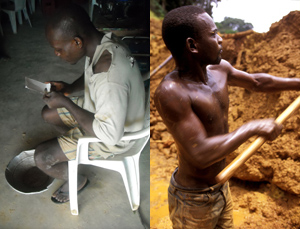 Contributed by Kirsten Hund, Senior Mining Specialist at the World Bank (Oil, gas and mining policy division) and formerly Regional Extractive Industries Coordinator for WWF Central Africa, based in Libreville. Kirsten is co-director of the Artisanal and Small Scale Mining in Protected Areas and Critical Ecosystems project (ASM-PACE), supported by PROFOR, and co-author of the study on ASM-PACE Global Solutions.

The statements above are just some of the opinions on artisanal gold mining I heard from a variety of government officials, conservation organizations and companies in Gabon. These opinions are indicative of the predominantly negative light in which artisanal mining is perceived; not only in Gabon but across the globe. Artisanal and small-scale miners are a force to be reckoned with: they work in more than 80 countries and produce some 10% of the world’s gold and 80% of colored gemstones. Rather than being a dying trade, artisanal and small scale mining (ASM) is on the rise. This trend represents a significant threat to biodiversity as well as to the integrity of protected areas including forests.

Still, reconciling economic and livelihood needs with environmental goals is not impossible. In fact, it is indispensable. Concern for both the livelihoods of miners and other rural populations, and the environment that supports them, has guided the work of the Artisanal and Small Scale Mining in Protected Areas and Critical Ecosystems, (ASM-PACE) project, supported by the Program on Forests (PROFOR) hosted at the World Bank, in partnership with WWF, Estelle Levin and The Tiffany and Co. Foundation. The project has produced several reports based on desk and field studies, including an in-depth study on artisanal mining in Gabon.

Certainly, Gabon offers significant opportunities for inclusive, green growth. With about 80% forest cover, Gabon has the highest forest cover as a proportion of national surface area of any African country. Gabon’s pristine forests have drawn attention from global conservation organizations to the extent that the country has been dubbed the ‘Green Heart of Africa.’ Gabon also possesses a fair amount of gold. Some of those deposits are located inside protected areas, their buffer zones, and / or in peripheral zones delineated as zones which are ecological crucial to sustain the protected areas.

Since 2009, high gold prices have led to a large influx of gold miners from predominantly West African countries (from as far as Burkina Faso) into Minkebe National Park, on Gabon's border with Cameroon. A mixture of facts, figures, rumors and concerns about the miners being involved in all kinds of illegal activities, from ivory poaching to arms trade, led to a government eviction of about 5,000 miners from the area in May 2011. At first, this outcome satisfied the country’s conservation community, but the community soon realized that the miners would return as soon as the soldiers left. Indeed, to keep the miners away from a known lucrative gold reserve would require a permanent army presence on site. Because those costs well exceed conservation and even mining budgets, such a presence cannot be sustained over time.

Hence, Gabonese policy makers are wondering how the country could benefit from its gold deposits without damaging the biodiversity of the Minkébé National Park. Attempting to regulate artisanal mining practices and steering them so that they become more ecologically and socially responsive, seems the only way forward. The ASM-PACE Gabon study makes a strong case for pragmatic steps in that direction.

There are reasons for optimism:

Most miners also seem to have a keen interest in having their activities recognized and formalized. Giving the miners a sense of environmental responsibility and treating them as stewards of precious parks and lands may help fight the continuing elephant poaching crisis the region is facing.

Not long ago, a high-level government official shared his vision that one day eco-tourists in Gabon would buy little golden gorillas made of sustainable gold.  Provided government parties are able to align their objectives and empower field staff, that dream could come true: a dream of ASM as an opportunity, a motor for rural development, instead of an ecological disaster for all.