Free lunch, in the shade of a marula tree 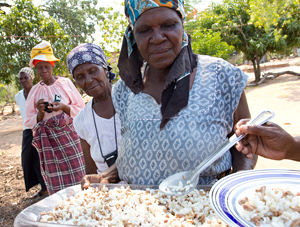 When the marula fruit falls to the ground in mid-January, it turns yellow, signaling the beginning of traditional beer making season in this part of eastern South Africa. The marula tree (Sclerocarya birrea subsp. caffra) dominates the rolling communal pastures and family courtyards in Bushbuckridge, a rural municipality in the province of Mpumalanga, near Kruger National Park.

In a landscape where most of the bush has long been cleared for timber, firewood or farmland, the marula’s survival is a function of its special status and multiple uses: the large tree (7 to 11 meters tall) provides shade, nutritious fruits and nuts, medicinal bark and cultural benefits. Indeed, it is explicitly conserved because of its value to people.

A visit to Bushbuckridge in December 2011, in the wake of the Durban UNFCCC CoP 17, highlighted the importance of such trees in providing ‘free’ goods and services to poor farmers.

Outside localized beer brewing areas, consumers are increasingly familiar with marula because of the success of “Amarula,” an internationally-traded liqueur that is derived from the fruit and produced by Distell, a large South African company. That commercialization has generated cash incomes in an area where poverty and unemployment are high. But the transition from a free commodity to a market good is not without its perils.

Sheona Shackleton, a scientist at Rhodes University in South Africa who has written extensively about marula and other Non-Timber Forest Products (NTFP), has found evidence that marula reinforces family relations and cements urban-rural linkages when family members return from distant towns for the beer drinking season. That social capital in turn represents “an important safety net in times of hardship” she and co-authors wrote in a journal article in 2009 (‘Livelihood trade-offs in the commercialization of multiple-use NTFP: Lessons from marula (Sclerocarya birrea subsp. caffra) in southern Africa’). Well-intended efforts to scale up the commercialization of marula products for poverty alleviation could end up excluding poor women who depend on this social capital the most, the authors cautioned.
--
The marula tree is widely distributed in the miombo woodlands which are the focus of a recently published PROFOR study on policies, incentives and options for managing the miombo in ways which benefit the rural poor.