A Bleak Future for African Drylands? 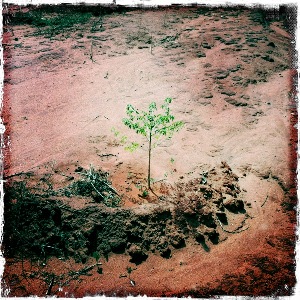 This week, world population crossed the 7 billion threshold, raising fresh doubts about our collective capacity to meet growing food and energy needs in a changing climate.

The Human Development Index sounded overall alarm regarding the price of environmental degradation borne by the world's poorest countries. (See "Environmental trends threaten global progress for the poor" Nov. 2, 2011 ) The authors warned that:

"Unchecked environmental deterioration—from drought in sub-Saharan Africa to rising sea levels that could swamp low-lying countries like Bangladesh—could cause food prices to soar by up to 50 percent and reverse efforts to expand water, sanitation and energy access to
billions of people, notably in South Asia and sub-Saharan Africa."

A story by Michael McCarthy, published today in the Independent, brings the relationship between poverty, population pressures, deforestation and land degradation into stark relief in Burkina Faso, one of the 10 lowest-scoring countries in the Human Development Index:

"These people were visibly, and tragically, trashing their own natural resource base: not only was the forest gone, the soil itself was disappearing. Who could blame them? It was done out of need. They were only trying to survive. But they were consuming their own future."

The stakes of climate change in African drylands will be one of the themes discussed at Forest Day 5 in Durban on December 4.

We hope you can join us at 16:00 for Change and Adaptation in African drylands: reversing deforestation while contributing to food security. (Read abstract here) Or send us questions and comments via this blog.