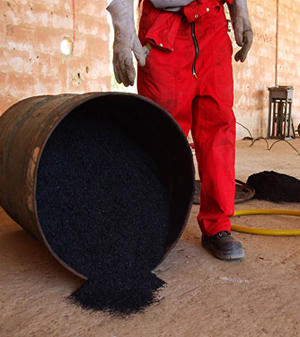 This blog posting was submitted by Sebastian Scholz, Senior Environmental Economist at the World Bank.

Biochar Systems for Smallholders in Developing Countries, a study we’ll be publishing in early 2014, explores how biochar systems can be used in developing countries to address the challenges associated with food insecurity and climate change. One case study that I found particularly interesting in the forthcoming book was a biochar system in Senegal that has been active since 2008. This system proved to be very profitable and substantially improved food production capabilities while sequestering greenhouse gases. As climate change negotiators meet in Warsaw, I am struck by the mitigation potential that that the large scale uptake of biochar systems could deliver.

In case you are unfamiliar with the term ‘biochar’, it is essentially charcoal made from agricultural waste but with the clear purpose of being applied to agricultural soils. So, instead of being burned as a primary fuel, it is tilled back into soils to improve fertility. While this practice can greatly increase crop yields, it also sequesters carbon from biomass that would otherwise be discarded and decompose into the atmosphere. Biochar is produced through a low-oxygen heating process called ‘pyrolysis’. Think about it as heating up biomass under the exclusion of oxygen. This process also produces renewable energy to be used for cooking, heating or lighting. Recent studies have estimated that large-scale development of biochar production systems could significantly offset global anthropogenic carbon dioxide emissions.

The biochar case study that we undertook in Senegal looks at a large-scale continuous process pyrolysis unit, called the ‘Pyro-6F’ (shown in the pictures to the left provided by Pro-Natura International) that produces biochar and is used by local onion farmers. The original intent of the Pyro-6F was to produce “green charcoal,” a renewable and clean fuel for household cooking. However, a growing interest in biochar as a soil amendment has increased the ratio of biochar to green charcoal production. The feedstock is rice husks obtained from a nearby rice mill, which would otherwise decay in piles. The biochar is purchased by farmers, and applied to onion crops on nearby farms.

The contribution analysis from our report Biochar Systems for Smallholders in Developing Countries revealed that for every tonne of risk husk feedstock the Pyro-6F processed, 414 kg of greenhouse gases equivalent (CO2e) was sequestered when ploughed back into agricultural soils. Given that this amount represents over 40% of the original feedstock by mass, this process is capable of sequestering substantial quantities of biomass carbon if deployed on a wider scale. As Chart 1 below shows, the majority of this sequestered CO2e is stored as ‘stable C in biochar’, meaning that the pyrolysis process has converted the biomass to a stable form of carbon that will not decompose into the atmosphere for centuries to millennia. This highlights a major advantage of this biochar system – not only can it sequester large amounts of CO2e, but it can store it safely for a very long time.

Perhaps an even bigger sales pitch for this type of biochar system is its economic balance. Our contribution analysis revealed that for every tonne of risk husk feedstock that this system processed, a net economic balance of over $6000 of revenue was generated over a 50 year lifecycle (see Chart 2 below). This is the highest economic balance of any biochar system we investigated on a per tonne feedstock basis and shows the high value of agricultural waste when ’bio charred’ as opposed to simply left to decay. Nearly all of this added value comes from the surplus onion crops that biochar additions to soil helped generate. Furthermore this value does not factor in monetary gains that could potentially be gained from carbon markets in the future. The fact that the majority of revenue is derived from surplus crop yields indicates that in times of climate instability, surplus crops could translate into strengthened local food security. If deployed on a large scale, biochar systems could be very effective in mitigating climate change and food insecurity in the future.

Biochar Systems for Smallholders in Developing Countries will be available on the PROFOR webpage here when it is published in 2014. Photo Credits: The two photos in this article were provided by Pro-Natura International.