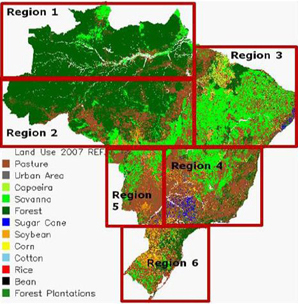 The Economics of Climate Change in LAC (2010)

Impacts of Climate Change on Rural Landscapes in Brazil

CHALLENGE
There is growing concern that Brazilian agriculture and forestry sectors are increasingly vulnerable to climate variability and change (eg. a decline in productivity of subsistence crops in northeastern Brazil; increased risk of fire and Amazonian forest dieback). To meet development, food security, climate adaptation and mitigation, and trade goals over the next several decades, Brazil will need to significantly increase per area productivity of food and pasture systems in central and southern Brazil while simultaneously reducing deforestation, rehabilitating millions of hectares of degraded land for cropping and forest plantations in the Amazon, the cerrado, the Atlantic forest, and the Pampas.

However, because of previous climate modeling and data limitations, there was still significant uncertainty associated with the projections for Amazonian rainfall (timing, seasonality) as well as the magnitude and locations of climate impacts in Brazil over the next 50 years. Improved climate change impact assessments were urgently needed to guide policy makers on priorities, geographical targeting (hot spots), and phasing of investments for adataptation and mitigation to climate change.

APPROACH
This activity implemented by the World Bank in partnership with leading Brazilian agencies and supported by PROFOR focused on establishing a robust and integrated decision and policy support framework that could empower Brazil’s policy makers and the agricultural sector to undertake the adaptation necessary to cope with projected climate change.

RESULTS
Projections for land use and forest land cover change, and an assessment of the distribution of land use and production were undertaken. Specifically, previous climate change projections were refined using a global, regional and local scale modeling; Regional Climate Change Scenarios for South America (CREAS) were used for regional and sectoral impact assessments; the Agro Climatic Risk and Vulnerability Zoning Model developed by EMBRAPA and UNICAMP was refined; soils were classified and cropping areas that are less vulnerable to climate change impacts were identified based on temperature effects through 2020 and 2030. A final report, in English and Portuguese, is forthcoming.

FINDINGS
The study showed that while for some crops (soybean and cotton) the projected negative climate impacts to 2020 are likely to be more moderate than previously projected, for other crops (beans and corn), however, the impacts could be significantly more severe than projected in previous studies. All the climate change scenarios simulated in this study resulted in a reduction of ‘low risk’ cropland area in 2020 and 2030.

More specifically, the findings suggested that the South Region of Brazil, currently an agricultural powerhouse, could potentially lose up to 5 million hectares (ha) of its highly suitable agricultural land due to climate change, while Brazil as a whole could have around 11 million ha less of highly suitable agricultural land by 2030. The findings of this study are being incorporated by EMBRAPA into the EMBRAPA/UNICAMP Agroecozone Model to improve the climate projections that underpin the national rural credit and insurance programs in Brazil.

Read the report in Portuguese.