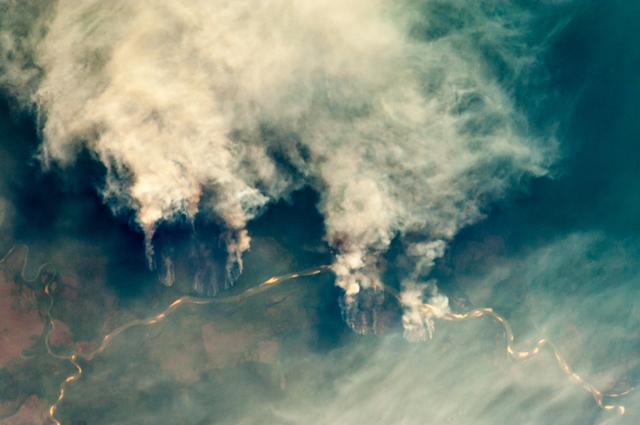 Forest Resilience for the Southern Amazon: Managing the Agricultural Frontier

Due to climate change, the dry-season length has increased over southern Amazonia since 1979, resulting in a prolonged fire season. Major droughts in 2005 and 2010 significantly damaged the southern portion of the Amazon forest in Brazil and elevated fire-induced tree mortality in as much as 12% of the southeastern Amazon forests. These results suggest that feedbacks between fires and extreme climatic conditions could increase the likelihood of an Amazon forest “dieback” in the near-term. In addition, a recent study of human impacts on the integrity of the Amazon forest reported that a combination of selective logging and wildfires turns primary forests into a thick scrub full of smaller trees and vines, which not only stores 40% less carbon than undisturbed forests, but is also more susceptible to fires from adjacent farms and pasturelands than pristine forest. Forests are also under threat from the conversion to agriculture, particularly at the Cerrado margin, which has seen the largest expansion of medium and large farms, often linked to dynamic external markets.

The development objective of this proposal is to provide guidance to key local and national stakeholders on the design of policies and measures with the aim of maintaining the resilience of the southern Amazon forest in the face of climate change, increasing forest degradation, fire risks and associated greenhouse gas emissions, and increased global demand for agricultural commodities.

In the short-term, this activity will improve stakeholders involved in policy-making and implementation understanding of the dynamics between forests, agriculture and climate change, and resulting forest degradation and fire risks in a fragile frontier by key. In the medium term, it is expected to feed into the policy cycle by (i) establishing a sound set of potential impacts under different scenarios; and (ii) providing the basis for informed dialogue around increasing the resilience impact of policies and measures in the land use sector under the National Climate Change Policy.

The activity is composed of three tasks:

The simulations of future fire regimes indicate that the Southern Amazon is on the verge of a drastic tipping point from which the extent of areas burned in drought years may even double. This happens consistently in the four scenarios modeled after 2030, with and without deforestation. In other words, a temperature rise of just ≈1° relative to the current average (2010-2015) could trigger a series of large forest fires during the most severe droughts in the region. In those years, areas burned in the Southern Amazon could extend to over 3.6 million hectares, an increase of about 110% relative to the extent of the 2007 fires. In general, there is an increase in burned forest area from 17% to 41% after 2030 compared to 2002-2010. Although the results of the three models and four scenarios analyzed diverge from each other slightly, the trend is the same.

While the results of the simulations are inconclusive for years of normal rainfall, the advance of deforestation (at current rates) implies that an additional 7-16% of land will be burned between 2011-50 relative to scenarios with climate change alone. Although forest fragmentation plays an important role in facilitating fire spread, the results show that drought is the key determinant of the fire regime. This points to a virtually catastrophic effect of droughts powered by global warming, even in a scenario of robust climate change mitigation and a sharp reduction in deforestation rates.

In terms of geographic pattern, the southern Amazon is likely to be very heavily impacted, with some variation between the southeast and southwest depending on the different scenarios. In addition, high-intensity fires during droughts will be more extensive, implying higher mortality and consequent loss of forest biomass. From being a potential carbon sink, the Amazon forest will become a net source of carbon dioxide emissions, feeding back into global warming.

These dire warnings are crucial because they relate to an ecosystem of extremely high local, regional and global consequence. At the local and regional levels, fires in the Amazon are destroying valuable ecosystem services that communities depend on. The vast majority of agricultural production in Latin America depends on rain, meaning that disruptions to these systems will have profound negative impacts on livelihoods, jobs, health and nutrition, and wellbeing more generally. At the global level, it is very alarming that the Amazon forest may soon become a net emitter of carbon dioxide, rather than a potential carbon sink, contributing to climate change and further reducing the resilience of communities and ecosystems.

The final report identifies very feasible policy actions that can mitigate these negative impacts, including:

Implementing such policies is critical to conserving forests and biodiversity, ensuring the availability of ecosystem services and keeping people out of poverty, and ultimately to achieving global targets like the World Bank twin goals, the Sustainable Development Goals, and the Paris Climate Agreement.