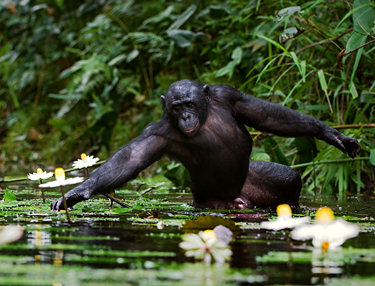 Trouble in the forest seen through the eyes of orphan bonobos

Balancing Mining Development and Forest Conservation in the Congo Basin

Digging In: New Opportunities for Mining and Conservation in Africa

In many African countries, native forests are under pressure from rapidly-spreading roads, dams and other infrastructure, as well as the allocation of large forest areas to mining, commercial agriculture, and other non-forest uses. Biodiversity offsets are one of the tools available to address such pressures. Offsets can be used to strengthen protected areas of similar or greater conservation value than the area lost to specific projects. The driving impetus for such offset schemes is usually biodiversity protection, although the associated conservation areas provide additional ecosystem services such as soil and water conservation, flood mitigation, and habitat for sustainably exploitable fisheries. In an era of often flat -- and sometimes declining -- governmental support for forest conservation in general and protected areas in particular, biodiversity offsets provide an underutilized opportunity to mobilize substantial new funding from public infrastructure accounts as well as the private sector.

Biodiversity offsets are not a panacea, nor are they always the best tool available for achieving forest conservation. As part of the “mitigation hierarchy” underpinning the World Bank’s Safeguard Policies and the IFC’s Performance Standards, offsets are considered a last resort, after efforts to avoid, minimize, and restore any significant damage to forests or other natural habitats. Nonetheless, given that many infrastructure, extractive, and other large-scale projects have an inherently large footprint, a biodiversity offset scheme may be warranted (and required by some funding entities).

A key challenge is systematizing and scaling-up biodiversity offsets through a national or other aggregated offset approach in order to overcome limitation like: (i) the high transaction costs often borne by each separate project; (ii) sub-optimal selection of conservation offset areas due to uncoordinated, ad-hoc approaches; and (iii) insufficient participation and ownership by governmental authorities in arrangements negotiated primarily between large private firms and conservation NGOs. The cumulative impacts of multiple (including smaller-scale) projects could also be more effectively addressed through an aggregate offset approach.

Under this activity, the team produced a Biodiversity Offsets User Guide containing key information about biodiversity offsets that practitioners should know about, with references provided where readers could obtain further information. Three case studies of reasonably successful biodiversity offsets were added to the User Guide as annexes. The case studies involved two private sector mining projects (in Liberia and Madagascar) and one World Bank-supported hydropower project (in Cameroon). These case studies are intended to show readers how the concepts explained in the User Guide can realistically be applied to achieve positive results on the ground.

In addition, in response to a strong expression of interest from the Government of Mozambique, this activity also provided legal technical assistance for incorporating biodiversity offsets into the Government’s official Environmental Impact Assessment (EIA) process. Two reports were produced: (i) An analysis of Mozambican environmental legislation with respect to the use of biodiversity offsets; and (ii) a draft revision of the actual EIA regulations.

Finally, two pilot Country Roadmaps were completed to assess the potential for large-scale biodiversity offset systems in Liberia and Mozambique. The Roadmaps are intended as preliminary country examinations of legal and regulatory frameworks, national policies, land use plans, financial structures, and other relevant information.

The research team found that multiple detailed publications already exist about the details and controversies of biodiversity offsets, but that a concise reference with practical advice on how actually to do them was still lacking. This is the void that the Biodiversity Offsets User Guide seeks to fill.

The Liberia Biodiversity Offsets Roadmap emphasizes industrial-scale mining. Since adequate funding for Liberia’s protected areas remains a challenge, biodiversity offsets offer the potential for improved financial sustainability. The Liberia Roadmap outlines a series of steps for scaling-up biodiversity offsets in Liberia; among the most important is the establishment of a national Conservation Trust Fund to enable the reliable and transparent transfer of funds from extractive firms to priority Protected Areas. The new Liberia Forest Sector (REDD+) Project, approved in April 2016 with support from the World Bank and Government of Norway, provides a vehicle for moving forward the Roadmap’s key recommendations.

In Mozambique, existing Conservation Areas (CAs) cover about 26% of the country’s land area, and encompass most types of terrestrial and aquatic ecosystems. However, most are seriously underfunded. The Mozambique Biodiversity Offsets Roadmap (also available in Portuguese) proposes using Mozambique’s BioFund to transfer biodiversity offsets funding from infrastructure and extractive industry projects to selected CAs that are ecologically similar to the project-affected areas. Implementation has begun of the Roadmap’s recommendations, through the Government’s recently revised Environmental Impact Assessment Regulations.