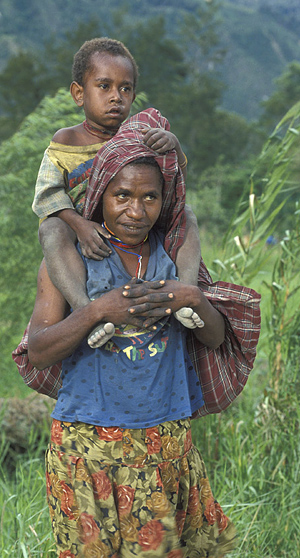 CHALLENGE
In Indonesia, the question of forest and land ownership is legally complex.  Indonesia’s post-independence land legislation, based on colonial practices, has continued to assign rights and allocate forest and land resources in ways that exclude or marginalize local people, especially historically disadvantaged groups such as indigenous peoples and isolated communities.  Approximately 70% of Indonesia's land is classified as forest zone and thus claimed by the state. Although only about 11% of this total land area has been legally verified and gazetted as state forest land, in practice, it remains under state control, despite contested and competing claims from communities, indigenous peoples, forest concession holders, and even local governments.  Insecure land tenure has long been known as a factor that impedes proper natural resource management.  Conflicts over land, for example, have contributed to the incidence of fire, and are recognized as a barrier to Indonesia’s ability to attract investment for continued growth.

In addition, natural resources, such as land and water, are not only the sources of livelihoods for many indigenous peoples but also a source of their identity.  The indigenous peoples' close relationships with their surrounding ecosystem have resulted in complex traditional tenurial arrangements and management regimes that are often at odds with the formal legal structures of the Indonesian state. This situation of competing claims to rights and ownership over forest lands complicates discussions on how benefits will accrue from climate change responses such as REDD+.

These issues go well beyond REDD+ and forest carbon/climate mitigation issues, but the institutional engagements and dialogue processes around REDD+ have recently created an opportunity for more concrete and open discussions with some real potential for progressive action.  A consortium of NGOs, led by Epistema Institute, as well as institutional partners and think tanks, has developed a Tenure Road Map for addressing land conflicts and improving land tenure. The Ministry of Forestry has now formed a working team for preparing a forestry macro tenurial plan including some of these organizations, together with the World Agroforestry Centre and some of the opinion leaders in this field.  At the same time, the indigenous peoples’ organization, AMAN, has developed a concept for a registry of ancestral domains (Badan Registrasi Wilayah Adat, BRWA). Parliament is also considering a draft law on indigenous rights as well as other legislation and regulations that would need to be assessed as part of the reform process.

The ultimate resolution of these issues will be a process, not a declaration or a ruling.  After addressing basic legal issues, the unfolding process will continue to encounter difficult and costly implementation issues, such as the need for national scale mediation and adjudication processes, institutions, and legal aid organizations; the need to build capacity in the legal system to understand, address and defend new bundles of rights resting with previously marginalized stakeholders; and the need to build the capacity of the local communities themselves (and their civil society advocates, advisors and service providers) to articulate and defend their rights and claims.

APPROACH
Access to potential REDD+ resources in the future is making it worthwhile for stakeholders to address and begin to resolve these thorny issues.  There is now an opportunity for a focused investment in continued dialogue and analysis that can contribute to consensus around some legal issues, practical tools, and ways forward. The activity drew on the existing work that civil society and indigenous organizations were developing (land tenure road map) in coordination with the Ministry of Forestry (MoFor) and the National REDD task force and combined this with analysis of successful experiences related to customary land rights recognition happening in Indonesia.

The analytical products, which were prepared through consultations, highlight the main issues and opportunities related to customary land rights recognition and benefit-sharing mechanisms in Indonesia. Findings present the case that the recognition of customary tenure rights has contributed to indigenous communities playing an increasingly important role in forest and biodiversity preservation, which enables the regulated use of forest resources and respect for customary and traditional practices and laws. Consequently, these communities have become major players and partners in the overall sustainable management of resources and nation building. Overall, the data suggests that forging the middle ground in administering indigenous land requires a mix of policy, regulation and support for grassroots change through community-based efforts. These changes should empower the weak and marginalized, enhance the quality of lives of millions of unsecured indigenous landholders through reforms, and increase public confidence in the land administration system.