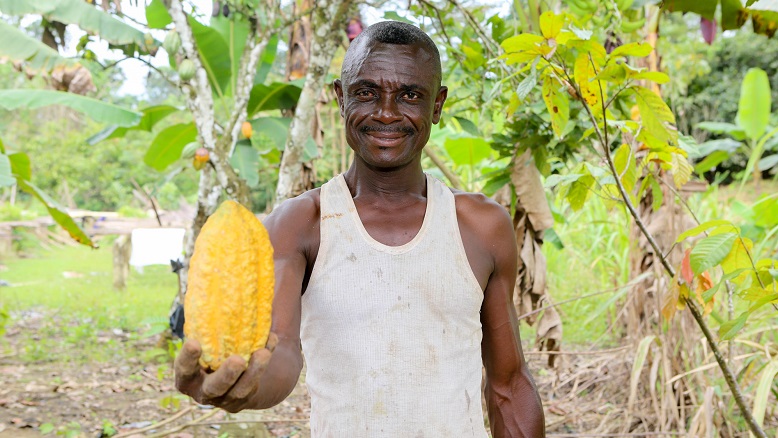 Cutting Deforestation Out of the Cocoa Supply Chain

This story was originally posted by the World Bank.

While global cocoa production relies almost entirely on 5 – 6 million smallholders, the processing level in the cocoa value chain is highly concentrated among several traders, grinders and chocolate producers. Even though deforestation occurs at the smallholder level, it is the companies, governments, and service providing NGOs that need to work to change policies and practices because the farmers have limited financial means and technical capacity to make the needed changes on their own.

The report, released by the BioCarbon Fund and the Forest Carbon Partnership Facility (FCPF) together with the World Cocoa Foundation and Climate Focus, describes overarching principles and key strategies that these stakeholders can implement to lay the groundwork for deforestation-free production in the cocoa sector:

1.       Protection of natural primary and secondary forest: Companies can commit not to source cocoa associated with the deforestation of natural forest.

2.       Legality: For producers and consumers, it is a priority to eliminate illegality within the cocoa supply chain.

3.       Transparency: Companies, policy makers, and advocacy groups need to know who is driving deforestation and where.

4.       Integration into long-term strategies: For the public sector, this means anchoring policies in long-term development strategies and legal frameworks. For the private sector, efforts that are supported at the CEO level and form an integral part of all operations will have the best success.

5.       Operation at Scale: Larger-scale programs allow the establishment of incentives across a landscape, and economies of scale in information and extension services.

Agricultural expansion is a well-known driver of deforestation, and much has been written about the usual suspects — palm oil, soy, cattle and wood products — which alone are responsible for 40 percent of global deforestation per year. But recently, cocoa – the essential ingredient in the world’s chocolate – is also being scrutinized for its role in unsustainable land use practices.

There are several reasons for this. Cocoa grows best in forested – or formerly forested – areas. For many years, expanding production has encroached into and ultimately degraded forests to plant more cocoa trees. In West Africa in particular, cocoa has been identified as a major driver of deforestation which has led to serious soil degradation, water insecurity and crop failures in the region. This cocoa-related deforestation also affects biodiversity hotspots in Sub-Saharan Africa and Southeast Asia.

More than 90 percent of production comes from smallholder farms that depend on cocoa for their livelihoods. These small farmers and their families have to be part of the move to more sustainable methods, but they often face challenges in adopting better production practices: low yields from older trees, pests and diseases that target cocoa plants, difficulty obtaining farming supplies, and limited access to financing for those improvements.

To address these issues, governments and the private sector are becoming increasingly active on sustainability in the cocoa industry. In March, twelve of the world’s leading cocoa and chocolate companies, including Barry Callebaut, Mars, Mondelēz International and Olam, came together for the first time to set up a cooperative initiative to end deforestation and forest degradation in the global cocoa supply chain. Since then, additional companies have joined and more than 30 are committed to the effort.

In recent years, the World Bank Group has also been active in the sustainable cocoa dialogue, especially in Ghana and Côte d’Ivoire where cocoa is a major driver of deforestation. In 2014 –2015, the Bank Group worked with Ghana on a scenario planning exercise to inform a cocoa sector strategy revision. And through the FCPF, the Bank Group continues to help both Ghana and Cote d’Ivoire to develop large-scale emission reductions programs that aim to create incentives for more sustainable cocoa landscapes by paying for emission reductions, once they are verified.  The Bank Group will also soon begin an analysis of the technical, financial and incentive barriers and opportunities to advance climate-smart cocoa at the farmer level, with funding from the Bank-hosted Program on Forests (PROFOR).

Through 2017, the World Cocoa Foundation and the leading cocoa producers will work to develop a global public-private framework of action to address deforestation in the cocoa supply chain. The FCPF will work in parallel to support the effort with analytical work and consultations.  This framework is planned to be presented at the United Nations Climate Change conference in Bonn, Germany in November.