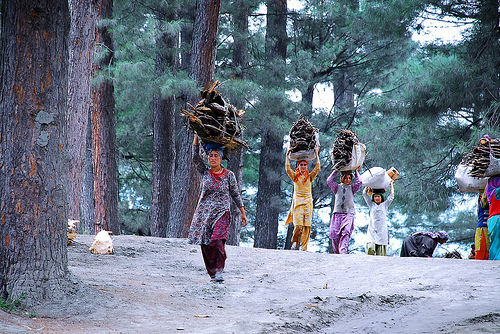 In India, some 100 million people live in and around forests and depend heavily on the collection and marketing of non-timber forest products. However, a lack of information on the links between poverty and forest dependence impedes meaningful interventions to reduce poverty and improve the overall well-being of this significant population.

The specific objectives of this work are to:

A detailed literature review revealed that the rural poor in India have diverse livelihood strategies, but that even households engaged in farming depend heavily on local forests for firewood, grazing, and leaf fodder and other non-timber forest products (NTFPs). NTFPs may contribute up to 20% of a rural household’s cash income. Firewood and fodder collection appear to be the leading cause of most forest degradation

Given the paucity of useful data in India for determining the link between poverty and forest dependence, a primary survey was conducted among about 1,000 households in the state of Madhya Pradesh in central India. Preliminary findings were shared among World Bank teams, Government of India officials, and participants at the IUCN 2016 World Conservation Congress in Hawaii.

High-resolution spatial mapping was carried out to gauge India’s current forest cover, recent deforestation, and poverty incidence; this is the first such geospatial overlay of forest cover and poverty for India. A second overlay highlighting the pockets of indigenous communities was also completed.

The mapping exercise shows that highly forested areas do not always coincide with areas of high poverty, and similarly low forested areas. This finding debunks the myth that forests and poverty may be directly co-related, even though it is sufficiently proven that the poor households in the sample derive up to one third of their cash incomes from forests.

The study also found that women-headed households are more dependent on forests, and that many households turn to forests to augment their incomes during times of difficulty, such as drought. Another result was that villages located closer to roads derive higher incomes from forests due to their ability to access markets where they can sell forest products. Finally, the study revealed that out-of-poverty households use more forest resources in absolute terms, even though poor households use more of such resources in relative terms. This suggests that forests play a role in keeping households out of poverty.

These findings were made available in a synthesis report aimed at donors, development partners, and government representatives, as well as in a technical note focused on issues of methodology. A second technical paper was produced with the research community in mind, containing full details about the results and the analytical strengths and limitations.The main findings of the review will be used directly in finalizing the Himachal Pradesh Forests for Prosperity project preparation and design with regard to aspects related to marketing, NTFP value chains efficiency, and supportive institutional development.

This activity has contributed to a re-entry of the World Bank into the forestry sector in India, as well as in South Asia more broadly, by underscoring the importance of forests in reducing poverty keeping households from falling back into poverty. Results are also informing the national Green India Mission (GIM), which aims to reforest 5 million hectares and improve forest quality in another 5 million hectares.